Dining in Portugal (and Europe) 101

I’ve sold everything to travel the world for five years. I post here less frequently, but on Facebook I’m updating just about daily, and you should follow me there, too.

It’s dinnertime for us North American types but I’m early for the Portuguese. The wine glasses here are served ridiculously small, so I’ve ordered a whole bottle of something cheap enough to leave some behind, plus a platter of meats and cheeses. My first Portuguese wine bar experience.

It was a cheese/meat place or a tapas place, so I’m splurging and doing the former, since it’s easier for me to take leftovers home. They’ll be my breakfast tomorrow. Civilized, no? 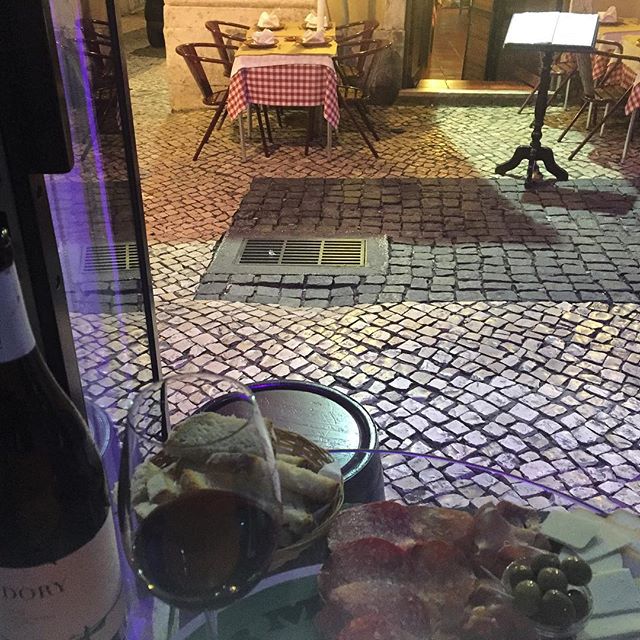 This is life in Lisbon on splurge day for me. I woke and found the first place serving Eggs Benedict since I left Canada 70-some days ago. I people-watched. I saw Star Wars ahead of my North American friends. Now I’m going to drink to excess a block and a bit from home. Stumbling distance, as it were. When in Rome, or Lisbon, as the case may be.

Lisbon, Portugal… I like the vibe here. I get this place. I don’t understand the language and the accents can vex me, yet I think I could pick them up with some more time. It’s a good thing I’ve got that. It’s another 44 days before the prospect of leaving this country dawns.

I’m sure there’s a lot I won’t understand about this country for awhile, but that’s what makes it foreign, right? If it was supposed to be familiar, it’d be called home.

You have to work to be a good traveller. It’s not something you show up and do haphazardly. It takes patience, understanding, curiosity, and the willingness to work at learning and knowing more.

But that would get expensive in dining, so I do my research. So, because I’m on a budget, I keep resorting to TripAdvisor for reviews. Sometimes they’re right, sometimes they’re wrong.

The trouble is, so many travellers come with North America locked in their brain. They have an idea of what service should be, how timely things should flow, and it skews their perspective on the world and the experience.

You can’t do that. This is Europe. This is the Old World. Leave your expectations at home.

This is the land before time. Homo Sapiens have roamed here for, what, 30,000 or more years? Civilization has existed for some 4,000 or so years?

Who the heck are you, New-Worldy-North American, to come here and tell them how to do their business? It doesn’t work that way. You’re the guest here. This is their game, their world, and they will not play to your rules.

Service does tend to be slow. That’s a thing. That’s not just a thing, actually, it’s a raison d’etre, it’s a way of being, it’s the whole POINT of being in Europe. If you don’t understand that, stay home. I don’t mean to be harsh, but really — it’s that serious. You need to think “slow” here. If you don’t have at least 90 minutes to eat, get fast food.

One of my favourite review “gripes” is that it takes too long to get the bill, that they “finally had to ask” for the bill from the server. Guess what? You’re actually supposed to ask. That’s how it works here. I have had to ask for every single bill in every single restaurant. When you sit down to a restaurant table in Europe, it’s essentially yours until you die or ask for a bill. They will not ask you if you want to pay. They will not rush you. They will not expect you to leave at any point in time.

In North America, that seldom happens. Here, it happens in nearly every price-point of dining establishment. Dining time is sacred. Take all the time you need. That’s the flow of Europe.

But this is where the North American vacationer’s time-crunch wreaks havoc. With only a couple weeks, or even one, at their disposal, time is, well, everything on a holiday. I get that. Really, I do.

Let me give you these tasty morsels of advice, then. 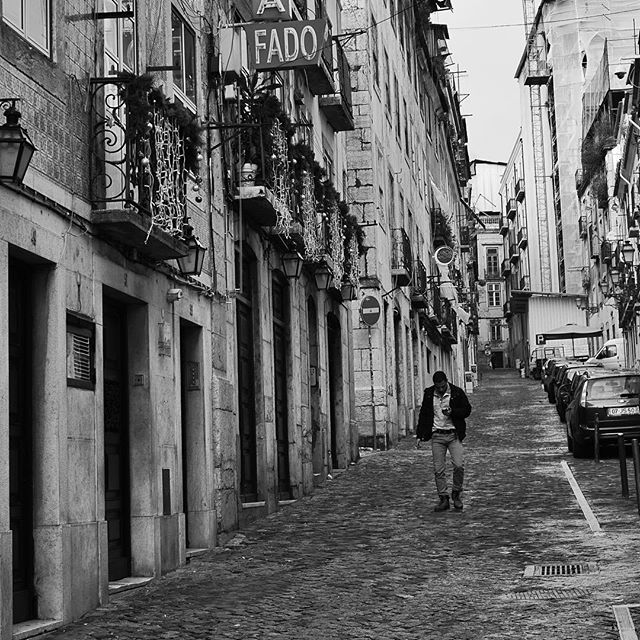 Get used to bakeries and patisseries and cafes for breakfast and lunch, but for god’s sake, eat out. That’s what travelling is about! You can save a block of time for dinner and savor the moment. Take a good long time to sit and dine and enjoy your life over a quality meal every day. Reflect upon your experiences, look at the photos you took, consider what your next day might bring, scheme about how today’s experiences should or could colour tomorrow’s.

It is a glorious thing to sit and enjoy a meal and not be rushed. Don’t lament it. Don’t gripe about it. Just redesign your day so that you only have to “linger” once. You can catch your breath and recharge in time for a late-night stroll so you can see the world with different eyes and a fresh perspective, and perhaps a wobble to your walk. 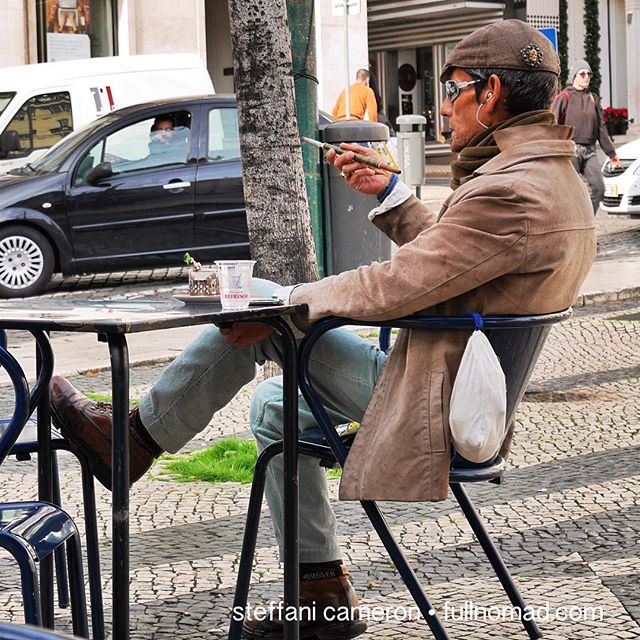 This guy should be your European Idol. How to be yourself and linger longly. I loved people-watching this dude. He brought his own cup and saucer and spoon to the square and transferred his paper-cup espresso to his china. Now that’s how you do Europe.

Hand Signals are Your Friend

Another tip is that the hand signal for getting a bill is universal. You hold one hand flat and mimic writing on that hand with the other. That’s “bring me the bill.” My sage wisdom is to do this when you see your server lingering near the point of sale or cash machine, that way you won’t have to worry that there’s some other chore or task that may befall them between the cash register and you. This method has yet to fail me. They will acknowledge you with a nod.

Expect to Pay in Cash

You won’t hear much about people who have credit cards with spending perks on them over here. As a result, a lot of people don’t use them, and dining establishments aren’t crazy about them either. Frequently you will hear that there are no cards accepted, so prepare for it and be flush with the bills when you dine out.

Here’s another tip – check your online accounts regularly, including the current market rates for your currency exchange. I just discovered today there is a 16-cent disparity per dollar between my cash withdrawal conversion rate and my credit card rate. One did not change to reflect last week’s currency adjustment, and for the moment it would appear I can save 10% by spending cash over credit. But this is a lie. There are weird charges and conversions and it actually winds up about the same as if I had spent the money on credit card, so don’t get too excited if the initial numbers appear awesome. Do the math and make sure everything is what it seems. Withdrawing cash may cost you more than spending in credit, so be prepared to withdraw extra to compensate and keep the transaction charges low. 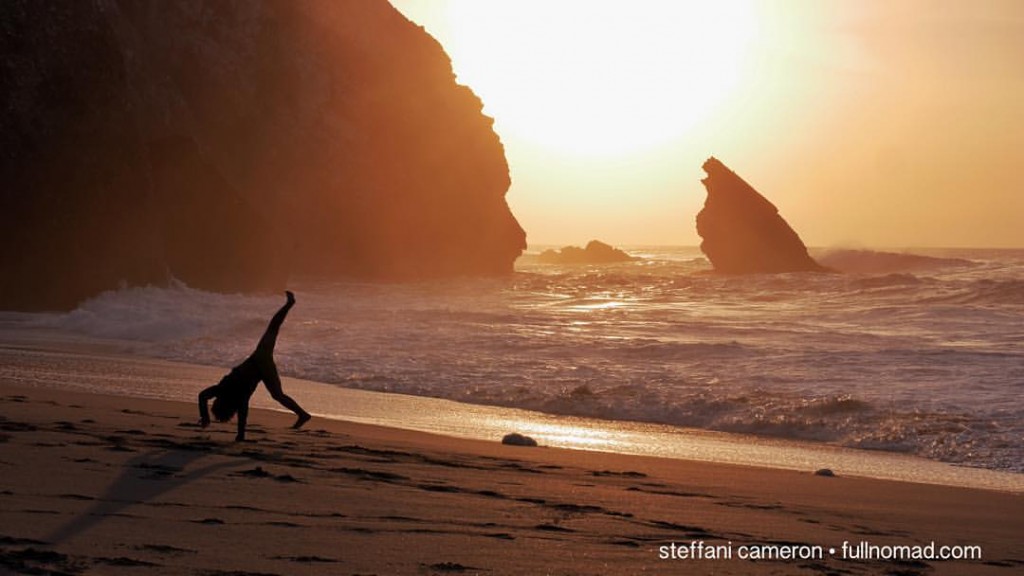 Okay, some things are free. Watching a kid do somersaults in the sunset, that’s free. By me, at the Praia da Adraga, one of Europe’s most stunning beaches, under an hour from Lisbon. But you wanna drive slow. Trust me.

Ain’t Nothing in this Life Free

Some places bring bread for free, like in Croatia, but here in Portugal I’ve learned to quickly turn away the bread and olives and whatever else they try to bring me when I sit down. They’ll charge me for anything I consume, and I know it. The bread, the olives, and whatever else, it’s all charged out to you – and it’s all listed in the menu, too, so you can’t play innocent. It’s your fault that you can’t read the menu in a foreign language, not theirs, so as much as you might want to dispute it, you’re screwed.

When Europeans visit North America and find out tipping 15-20% is the norm, it’s a rude awakening, and so is having tax applied at the till. Here, the VAT (value-added tax) varies per country, but it’s included in your bill. Tipping also isn’t really a thing, not beyond 10%. Generally, you’re just expected to “round up.” 10% is a pretty sweet tip in most countries here, and in some, no tip at all is expected. You should Google it before you come, depending where you go, and check a few sources to see if they’re all in agreement on the practice.

When I was in Croatia, everything was so much cheaper that I was a bit of a big spender and tipped more generously, but I also knew how little most Croatians earned and how much struggle they faced, so it’s kind of an attempt on my behalf to stack the karma cards in my favour. Which brings me to…

Yeah, some travellers are on a budget. I get it. They want more travel, more experiences, so they’re haggling for every penny. But, really? Come on. Try to imagine the hardship in some of these people’s lives. Look at their hands, their teeth, their tired faces, and tell me they don’t need those pennies more than you do.

You’re already lucky enough to be living one of your dreams. Some of the folks you’re meeting have never been more than 150km from where you stand. Remember that. Be kind, be considerate, and be a brief and shining light in their life. Believe me, it comes back to you. 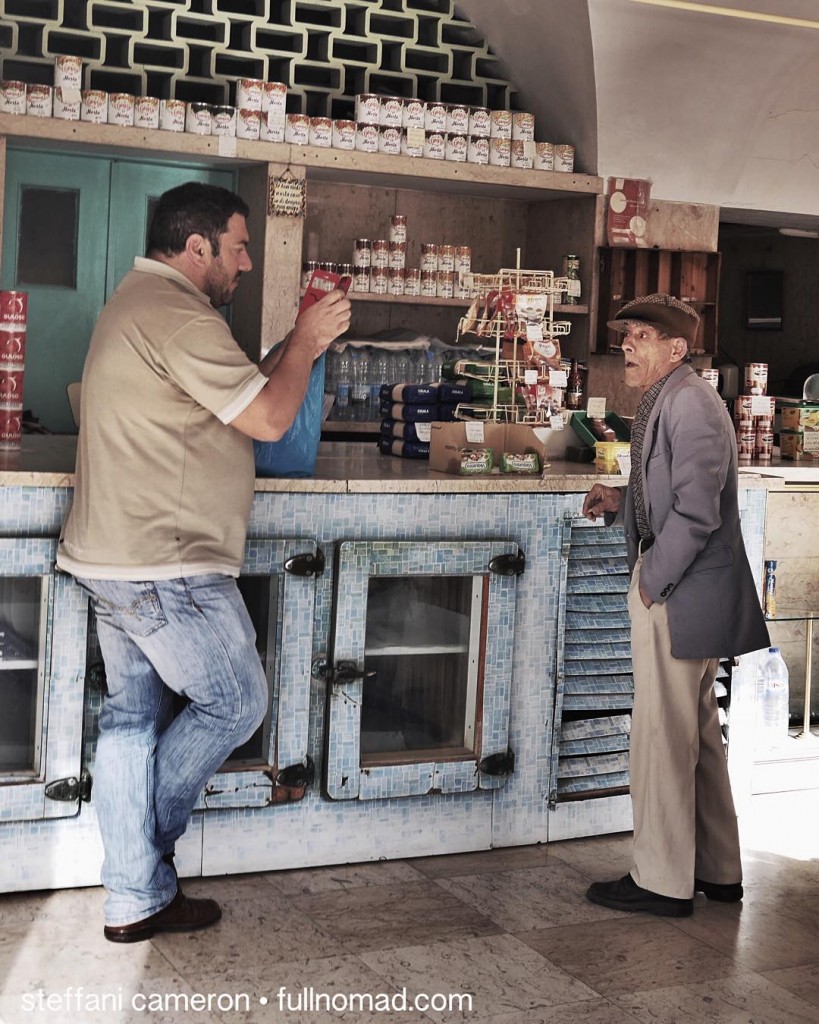 Life is what happens in between the events. Stop and experience them, like me walking by this shop and hearing shocked laughter and quickly snapping this photo. I’ll forever have a momentary memory of this laugh, and that’s what you can’t buy and don’t pay tax on, man.

And of course, there’s more

It’s Europe. It’s a big, beautiful place and I have barely to crack the nut, but these are the tips I can give you so far, and some of them apply to anywhere in the world you might travel – like haggling, tipping, and such.

Know where you’re going, what the customs are, and what you should expect. Ignorance does you no favours. Make sure you look up a few basic words, like “please” or “thanks” and “excuse me.”

In both Portugal and Croatia, trying to order food in their language has started great conversations and gotten me free tips and suggestions. You might blush a little as you fumble through, but they’ll appreciate the sign of deference to their culture. I’m glad a friend urged me to do it yesterday here, because I saw an amazing museum as a result. Give it a try.

Remember, you’re a guest, it’s their culture. Don’t expect them to live according to your terms – and have fun with that, because learning about THEIR world is the whole point of travelling!

dining out eating in Europe eating in Lisbon how to order life in Portugal lisbon Portugal restaurants taxes tipping tipping in Portugal tips for travelling in Europe travel tips what to do in Europe
Dining in Portugal (and Europe) 1012015-12-172016-05-10//www.fullnomad.com/wp-content/uploads/2016/04/logo2.pngFullNomad//www.fullnomad.com/wp-content/uploads/2016/04/logo2.png200px200px
About
Steffani Cameron
In 2015, I sold everything to travel for five years. I'm living out of a duffle bag and works wherever I can get some Wifi. A trained journalist and avid photographer, I'm passionate about culture and what makes us tick. Click below to contact me for projects and opportunities.

Then I Was in Portugal: My Grand MisadventurePortugal