Humid, always humid. It’s after dark on the eve of the Thai King’s funeral. I’ve just chowed down on a passable burger and great fries. Soon, I’m off to buy two Thai dishes to take home. Tomorrow, after all, Thailand is closed for mourning, and I have a microwave. At $3.50 for a great take-out meal, cooking is just stupid. (And cooking is even stupider when all I’ve got is a frying pan and a hot-plate with two feet of kitchen counter space. Except if cooking means frying eggs, because eggs.)

After a full year and two weeks of mourning, the Thai King will be cremated and lain to rest as this nation looks on, largely crippled with grief, saying goodbye to a great era of prosperity and change. What’s to come, no one knows. Thais won’t speak of the new Thai King. It’s too early to tell, plus there are laws for expressing doubt or hesitation or concern. Fealty is enforced, something we Westerners may never understand.

And, so, the country will be closed. 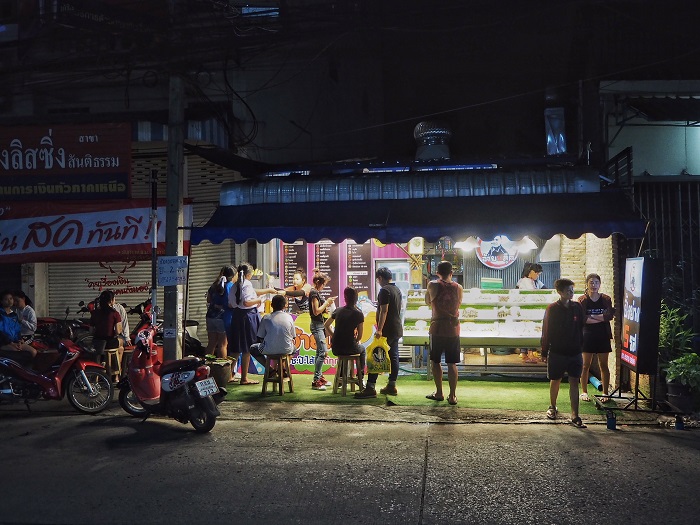 Local food is great here, and this is the neighbourhood I’m in — Santitham.

When in Bangkok, I ponied up the big bucks – which, in hindsight, I now realize was far too expensive – for a custom-made black shirt by which to mark the Thai King’s death. Very stately and mourn-y and black. The few Thais I’ve told that I bought a mourning shirt looked truly touched that I had revered their loss so much.

Authorities expect over 200,000 to be present in Chiang Mai at the replica site to watch local ceremonies and a simulcast of the Thai King’s cremation. The city has a population of 150,000, so when they say, “subjects will attend from far and wide,” they’re not kidding.

But, to attend, a black shirt isn’t sufficient, I have learned. Women must wear skirts, no short sleeves, and closed-toe shoes are required. So that leaves me out. 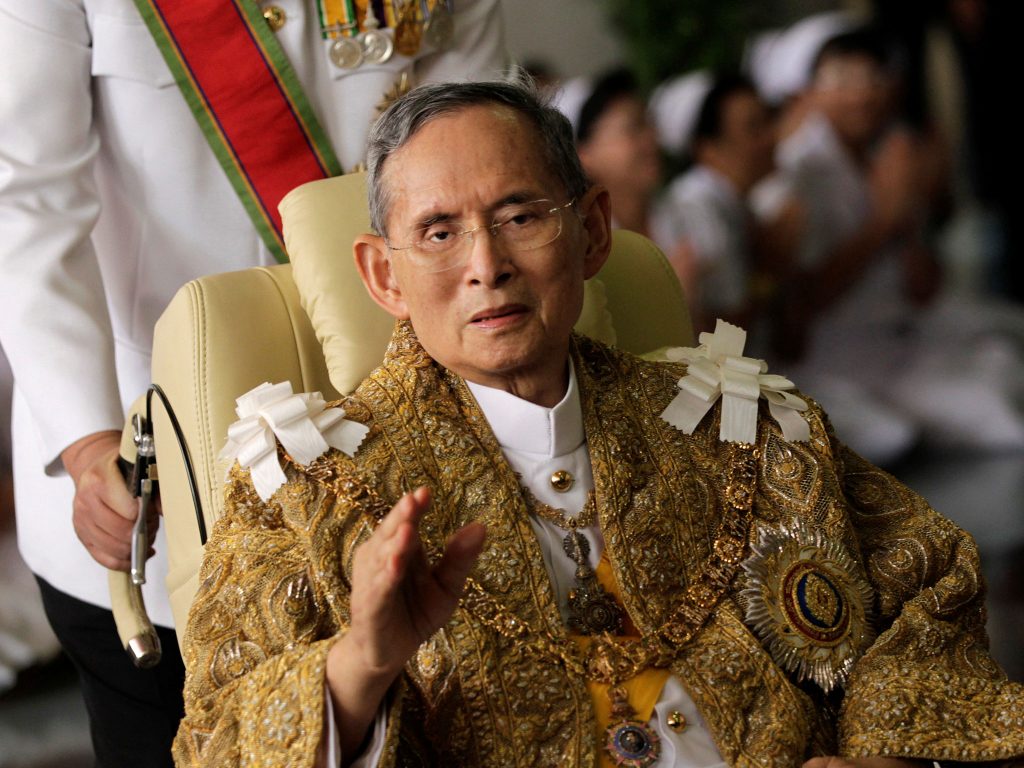 I’ll wear my black shirt for breakfast in the morning. And in so doing, I’ll treat the Thais with much reverence and kindness as they prepare for a day of mourning. At around 2, everything closes. Everything.

I know of many travellers who’ve avoided coming to Thailand precisely because of the mourning. I don’t understand that. I’m here for history in the making. I didn’t know about the King’s death ceremonies when I booked the reservations to come here, but they didn’t deter me upon learning about them, either.

Coming north by train, I saw much rural poverty but also much farming, and the further north I got, with these lush tropics and verdant fields, it became increasingly clear how much agriculture and farming influences the region. This, they tell me, was the King’s doing. He didn’t just send representatives far afield to teach farming or life skills to the rural northern poor – he came himself. He, himself, visited these people and impressed upon them that they could be their own saviours. He brought in experts to teach them to grow rice and other crops. He taught them to diversify and think big. He introduced medical care and other resources, all in an area that once felt distantly removed from the Kingdom of Siam.

Here, in the North, the King changed lives and gave people hope. He celebrated the region, too, using his love of photography to record the country through his own eyes. He never forgot this place, and they’ve never forgotten his remembrance of them.

And so, tomorrow is a sad day. It’s the end of an era and the rise of uncertainty. Times, they are a-changing, and I’m here to see it happen. 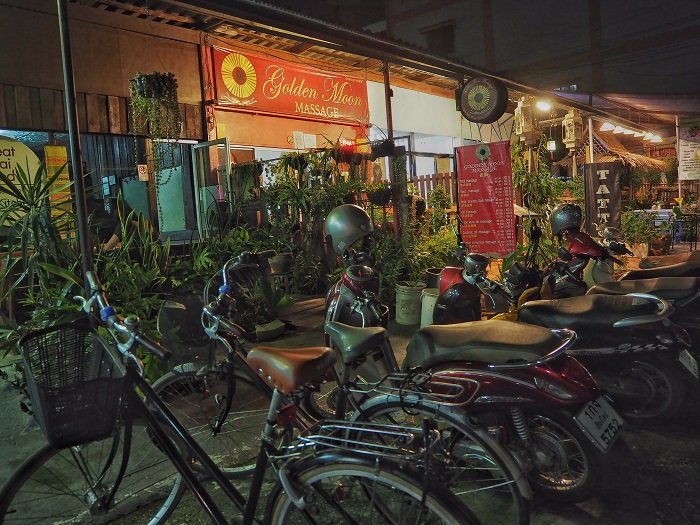 Shot outside the little Thai food joint I’m off to visit in a moment. Santitham, Chiang Mai, Thailand.

Home is Where I Hang My Ballcap

Meanwhile, I’m not playing tourist much right now as I’ve finally secured my place to stay for a month and the working conditions are good. There are few places on the planet that digital nomads are more inclined to revisit than Chiang Mai, so I’ll see what I see when I’m not working, and can always come back later – especially if I make a few friends worth coming back to see.

To that end, I’ll be trying to connect with new people in between working on some projects to combat the always-unawesome feeling of paying out a few thousand dollars to book living arrangements well in advance.

See, I was told by folks to just come and find a place, that it’d be easy to do when I was in town, but it wasn’t. Instead, it was complicated and time-consuming, and disappointing too.

So now I’ve paid out more in the short-term, thanks to deposits, than I would’ve had to pay had I used AirBNB. I could’ve chosen fancier places and wouldn’t be in my present predicament.

It’s a case of lesson learned. It’s better for me to waste a couple hours scouring AirBNB than losing two or three afternoons looking at apartments. Time is money. But, worse, time is time. I’m in amazing places. I’m in AMAZING PLACES. Why the hell spend it looking at apartments when I can lie in bed and surf a website, press “book now”, and be done with it?

But that’s nomad life for you. It’s not one-size-fits-all. Your experience won’t be mine, and mine won’t be yours, and that’s just fine.

So… Chiang Mai! I’ve already been here over a week and will now be here another 44 days, making it officially the longest I’ve stayed anywhere in over two years. If I lose a little time to work, then that’s great! I’ve got time, lots of time.

In fact, I’ll leave the country on December 8th then return to Thailand for another month, but when that happens, I’ll be in the true north, on the Laotian border, staying in a traditional teak house on the Mekong River for the Christmas holidays – one of my inner-writer’s dream come true.

For now, it’s about to be “trivia night” here in this café, and I’m not feeling trivial, I don’t know these people who clearly all know one another, and my local-real-food joint closes in 48 minutes.

Tick-tock. Got nothin’ but time. 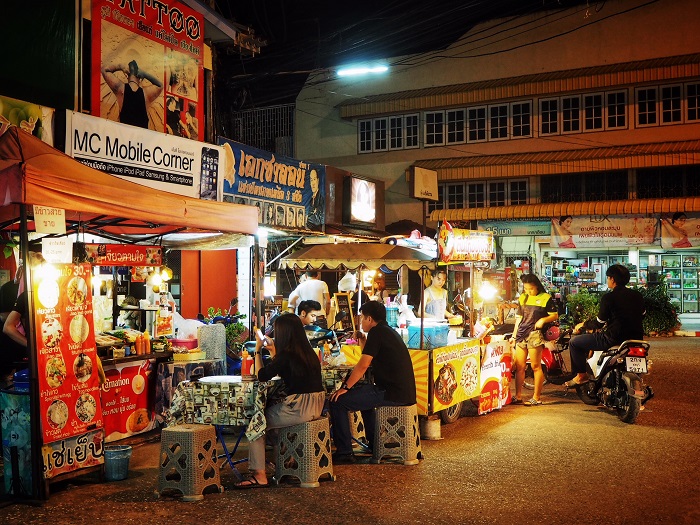 Night-time Asia is different than daytime Asia, and streets come alive after dark, when the sun vanishes and the disease-spreading dengue mosquitoes have gone to bed. (The big mosquitoes come out at dusk, but they just make you itchy. You can’t, you know, die.)

Chiang Mai King Bhumibol Thai King thailand travel
The Thai King Is Dead, Long Live the Thai King2017-10-252017-10-25//www.fullnomad.com/wp-content/uploads/2016/04/logo2.pngFullNomadhttps://www.fullnomad.com/wp-content/uploads/2017/10/Snapseed-2.jpg200px200px
About
Steffani Cameron
I'm a journalist born and raised in Vancouver, Canada. Trapped in a life others kept selling as "the dream," I decided my dream was decidedly different. I sold all the stuff I'd worked so hard to acquire, and at the age of 42 I set off searching for something else—culture, food, adventure, far off lands. In short, I sought the whole world. 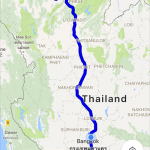 Thailand: From Bangkok to Chiang Mai By TrainThailand 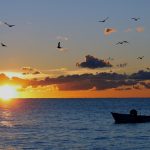