There’s Something About Sofia (Bulgaria)

The screaming has subsided. Somewhere nearby, I pictured that meme of “my child is crying… because I wouldn’t let her lick the floor.” That blood-curdling scream that means a two-year-old is way, way past naptime.

So now, screaming gone, what remains is the clatter of dishes, puttering of passing traffic, and ambient music that’s just loud enough to enjoy but not loud enough to decipher.

Since I last posted here, I’ve finished off Crete, spent two amazing weeks in Istanbul, where my photography was off-the-charts rewarding, followed by taking the train to a workaholic month in Plovdiv, Bulgaria, and now I find myself in the nation’s capital, Sofia.

And boy, am I smitten with this town. The food, the people, the bustle, the energy, the history, the culture, the price – it ticks all the boxes.

Unfortunately, I’m only here for a week. Alas. But, belatedly, some of my Istanbul photos: 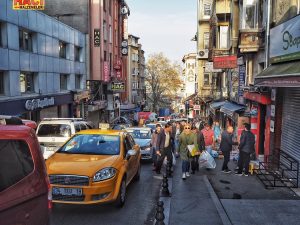 The bustle in an urban residential hood in Istanbul. 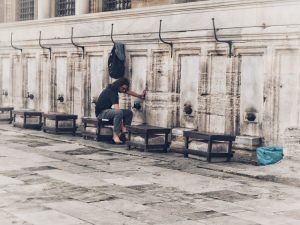 A man washes his feet before prayers at Suleiman Mosque. 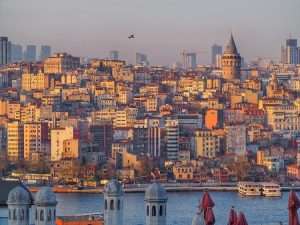 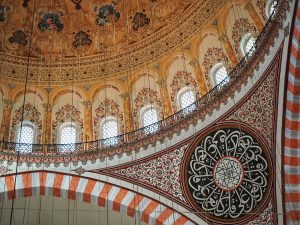 The incredible artwork inside 500-year-old Suleiman Mosque in Istanbul. 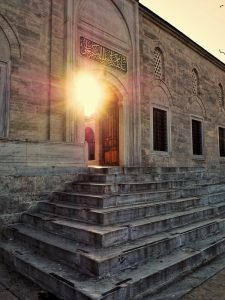 Sunlight shines from inside a mosque courtyard. 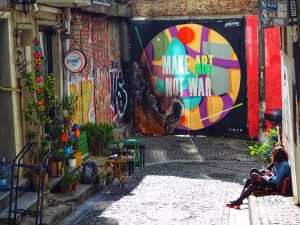 I leave Friday for Serbia, and I’m torn about that. All the parties in the Balkan War of the ‘90s had moments where they lost their humanity and gave in to the proverbial dark side, but the worst of them was Serbia. The war crimes they committed were horrific.

But it’s like the coffee roaster guy told me today here in Sofia, “People – they know how to live together. Politicians, they don’t. Politicians make mistakes. Politicians lead us to bad places. Without politicians, we find a way to get along.”

And that’s exactly what I’ve learned on my travels, especially here in the Balkans. Once people meet and connect, they get past their damages. But then there are the politicians. Politicians are the spark to the powder kegs.

So, this will be my first time visiting a country who was the aggressor in a war during my lifetime, the first time I’ll be somewhere responsible for acts of ethnic cleansing and other horrors. To reconcile my knowledge of that with the faces on the streets – well, that’ll be interesting. 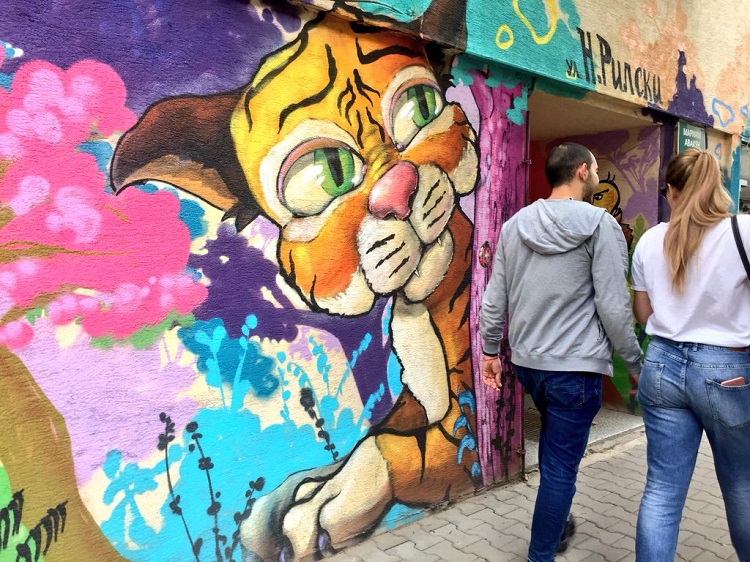 Couple strolls on a Sunday, past one of the funky murals in Sofia.

There’s Something About Sofia

Like most Balkan countries, it’s filled with buildings that wear crumbling graffiti’d facades and jagged, ragged, sidewalks, cobbled streets, and all the other signs of a society on the outskirts of profitability. At a glance, it can be ugly, off-putting. But look closer here and something sets it apart from most Balkans I have visited – the streets are clean, there’s no litter. Theatre is well-attended, culture is celebrated.

Beneath the gruff, grizzly exterior lies the cultured heart of one of Europe’s oldest cities. More than 7,000 years of history exists here. It’s older than Greek civilization, here in Sofia.

Money’s hard to come by in these countries and it shows. The average Bulgarian earns $8,000 to 9,000 Canadian a year, I’m told. But they live good lives, for the most part. They dine in eateries, spend time with each other, pick up a gelato on the walk home, deviate from the day’s plan for a prolonged coffee. They read a lot, if the book-selling tables streetside are any indicator on the weekends. They make good wine, laugh often, and are proud of their culture.

I’m trying to negotiate a two-month return here this fall. I like it that much. Everyone I know who’s been, who’s a nomad, also says how they could see themselves overstaying their welcome in Sofia. Met a fellow last night who came for a week eight years ago and never left. Another guy, 12 years ago. Another, four.

There’s just something about this town, especially if you’re a creative. 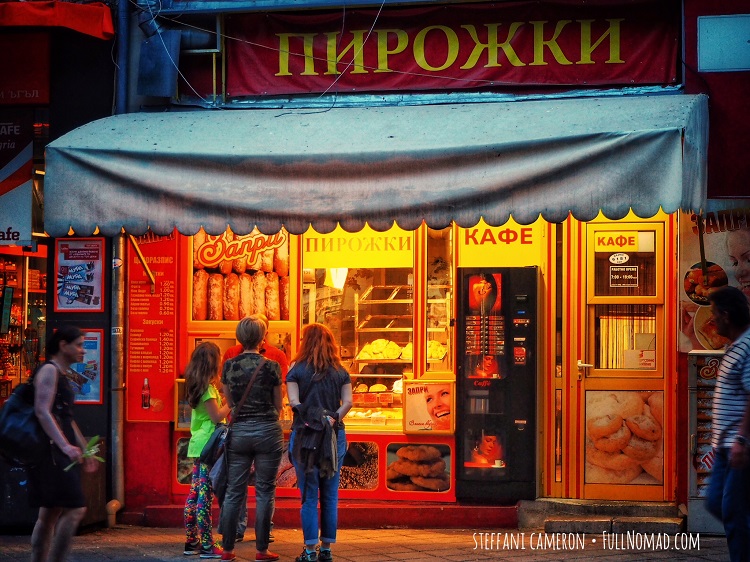 Women look into the window of a closed bakery at night. Plovdiv, Bulgaria.

My friends and I talked about Paris in the 1920s and ‘30s. Paris wasn’t the hotspot in Europe at that time because of being “the city of lights”, it was because it’d been obliterated in the war and things were run down, you could rent a place cheaply. People struggled with money, keeping prices low. It’s why writers and artists congregated there. Money. Culture. Possibility.

We creators, we sacrifice income for creative autonomy. We’ll do what we can to get by in the careers of our choices – if it means moving to creative centers where we might sacrifice some lifestyle choices, then so be it.

That’s the sort of vibe I find here in Sofia. It’s all about the cycle of decay and rejuvenation. When a city such as this is trying to burst out of its chrysalis, the wise and the few clamour to join during the unpleasant spectacle. In a while, it becomes the beautiful butterfly we all knew it would be. But, those without the vision of what’s possible, they don’t arrive on the scene until after beauty is made obvious and easily consumed. Sofia will get there in the coming years. You heard it here.

Take my AirBNB, for example. The outside, obliterated with graffiti. A door cobbled together with supporting wood to keep it from coming apart. A crumbling front step. Enter, and it’s a dark, depressing, intimidating hall. Exit the back door, round another crappy deteriorated walk, and someone’s laid out a paver so the first lopsided 12-inch-high step is cut down by a 3-inch assist. Then, four rickety floors up, no interior lights, and when the door opens, it reveals a gorgeous 1930’s apartment with 10-foot ceilings, all recently renovated, beautifully decorated, with giant windows and glorious light.

And the neighbourhood – crammed full of small eateries and cafes, little funky businesses, pocket-sized parks and pedestrian-friendly areas – it reminds me of Vancouver’s popular “West End” in its more charming days. 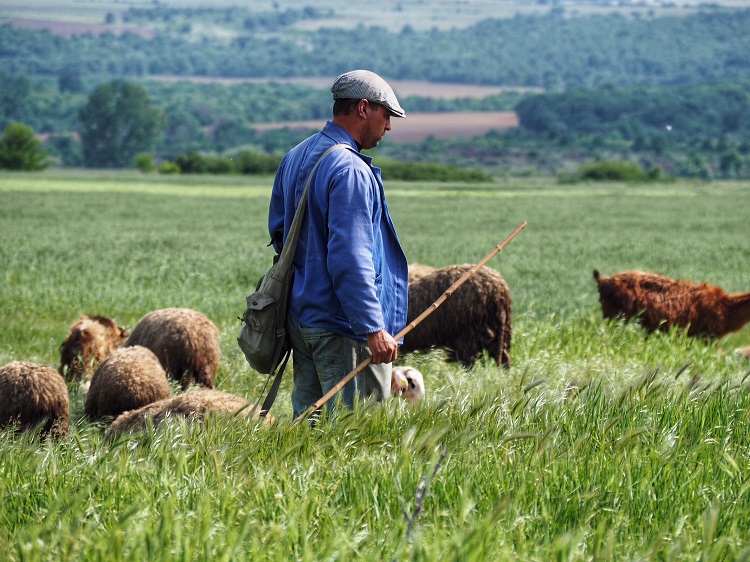 Shepherd tends his flock in the poor rural province of Shumen, in northern Bulgaria.

My Sofia visit didn’t start off that way. My first AirBNB was on the other side of the huge pedestrian street that extends about a mile – but a loathsome bed and bizarrely appointed microscopic bathroom sent me away.

The bathroom? Oof! A 2.75 x 2.75-foot square of floor had the sink on the left of the toilet, and a braided pipe ran up the wall from the bathroom sink. This was the showerhead. You just stood on that tiny patch of floor and showered – no stall, no curtain, nothing. After, you mop the floor up and wipe down the mirror so you can see your face. If you wanted to do a poop on the toilet and shower at the same time, you could totally cross that off your bucket list there. Living the dream!

But apparently we can call that bathroom “the Sofia Special,” because I’m told it’s a thing here.

And why would anyone design a cute apartment, then cheap out on the bed? Bare minimum of slats, the weakest slats, then a soft mattress? I want to grab hosts like that by the scruff of their necks and shout “WHAT ARE YOU DOING?” Luckily, in 32 months of travel and over 60 AirBNBs, only 4 beds have been so bad I’ve had to finagle a refund.

Luckily, the new apartment has me talking about returning for eight weeks. So, there’s that. 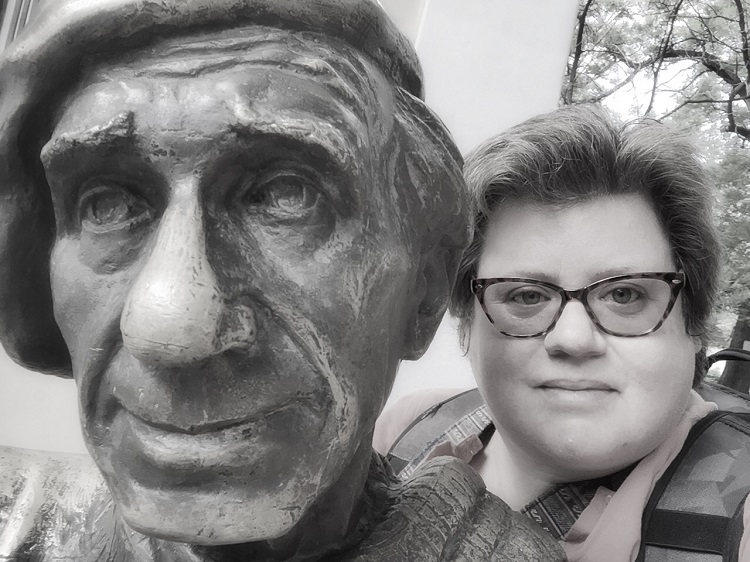 Getting a selfie for a change. Plovdiv, Bulgaria, with a big-nosed painter’s statue. All the French tourists posed with it before me. He’s popular.

Status of the Steff Quo

I doubt I’ll see much more beyond my funky neighbourhood this week, as I’ve got to catch up on work. When I was in Istanbul, I took a little time off, as I anticipated it getting busy. Boy, was I right. It’s been my busiest month in over three years.

I do look forward to exploring more. I’m told every Sofia neighbourhood has a different flavour, so I’d like to get out to the surrounding districts and see what’s offered and where. I’ve lucked out that I landed in such a great introductory ‘hood though.

Still, all this work, the short travel turnovers – they all add up to blog neglect, of course. But get this – I’ve written probably 10 or more posts for you. I just do the writing then never find time for the frustration of posting it. The writing is only half the work; getting it live on the interwebs is frustratingly onerous for me. So, all these blog posts are just sitting there in the depths of my hard drive, waiting for the day I bring them out. This one, for instance, was written four days ago and has sat as an open webpage, half-edited, no photos, from then until now.

Eventually I’ll do a little e-book, perhaps, of all those half-finished glimpses of places in time. And that’s why, starting in July, I begin doing two-month stays, not one-month. Oh, how I look forward to this. The writer living a writerly life! Joy!

What’s coming up? Next, Belgrade, Serbia, for a month. Then a week in Zagreb, Croatia, followed by eight days in Budapest, Hungary, and two months of Bucharest, Romania.** The long hot summer is under way!

** – Edit! I have since landed a one-week teaching gig in the remote forests of Northern Poland, northeast of Warsaw, so that’ll be happening between Budapest and Bucharest. I’m really excited about it too. Looking forward to the clean, pine-y scent of trees for a few days. I’ve missed nature.

(If you dream of me writing more for you and getting it live, feel free to contribute to my Patreon account, where people can support my creative endeavours or say “thanks for the stuff, Steff” for as little as a dollar a month.) 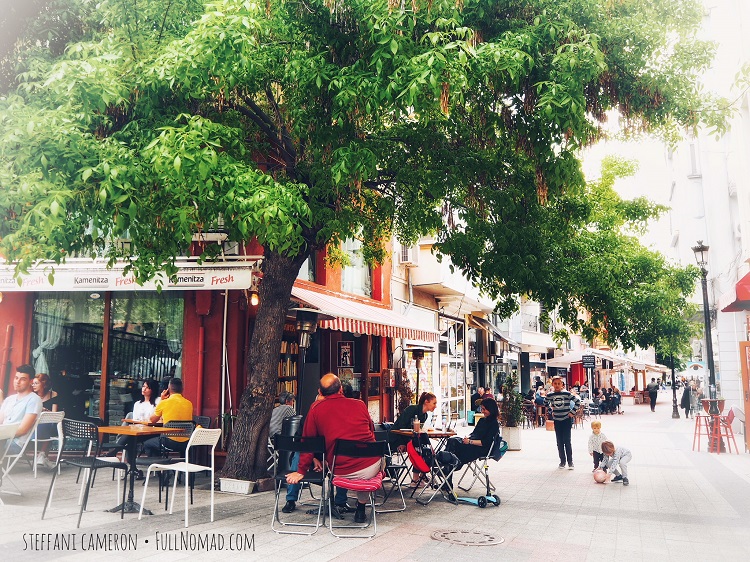 Both Plovdiv and Sofia are creative and have a great balance with the quality of life, but Sofia is more dynamic and urban, Plovdiv is a little slower and easier.

art Bulgaria creativity Crete Istanbul travel turkey work
There’s Something About Sofia (Bulgaria)2018-05-232018-06-12//www.fullnomad.com/wp-content/uploads/2016/04/logo2.pngFullNomadhttps://www.fullnomad.com/wp-content/uploads/2018/05/Snapseed-29.jpg200px200px
About
Steffani Cameron
I'm a journalist born and raised in Vancouver, Canada. Trapped in a life others kept selling as "the dream," I decided my dream was decidedly different. I sold all the stuff I'd worked so hard to acquire, and at the age of 42 I set off searching for something else—culture, food, adventure, far off lands. In short, I sought the whole world. 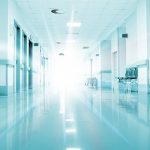 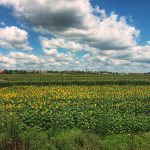