Somehow, weeks have passed since I fled Guanajuato for San Miguel de Allende, and I have neglected to share all that with you. Bad nomad.

Yes, spiralling into the reality that I’m depressed has had something to do with it, but also just work and busyness.

You see, before I left Canada, I had worked 2.5 years for six days a week. I never took time off because I knew this life was waiting for me. Day in, day out, I’d wake early, want to sleep more, but always realized that wouldn’t get me what I dreamt of – this travel life.

So, that’s what I did – work, work, work. And I thought, “Well, once I start travelling, life will be more restful.” Guess what? Not even REMOTELY true. 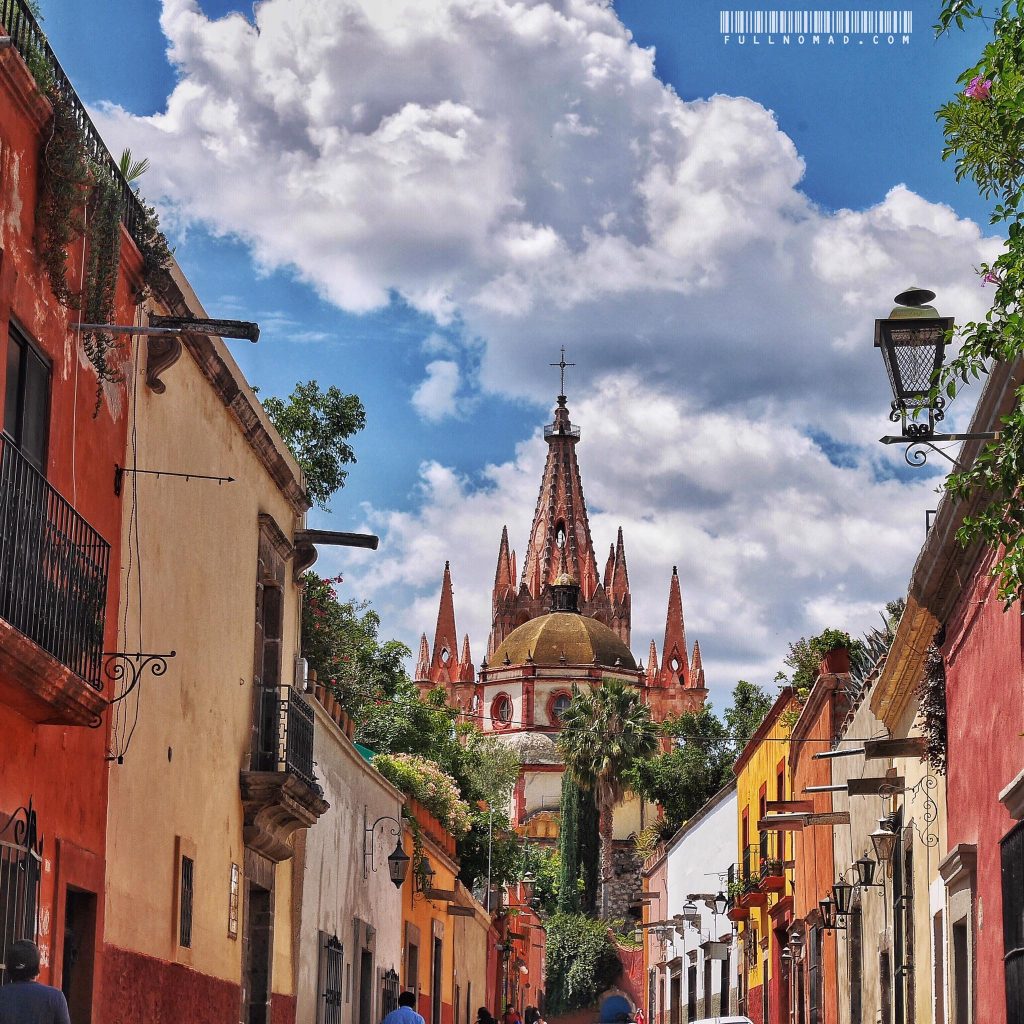 And this is San Miguel de Allende. It’s certainly a pretty city.

The Myth of the Relaxed Nomad

Maybe other nomads relax more, but I haven’t seen that to be true. This is a trying lifestyle and it can take a long time to get adjusted to the rigours of living life untethered.

I work 40 hours a week – half that for my day job, and the other half, at least, is spent either working for clients or trying to round other sources of income up. When I’m not working, I’m usually trying to learn about the area I’m in. Maybe I’ll explore, or maybe I’ll visit the places near me in an attempt to feel like I’m a local somewhere.

Then there’s the writing I do for myself and the projects I’m working on that never seem to end. Photographs need editing, the book needs writing, my new blog design needs fixing, and on and on it goes.

So, when people adorably think I’m travelling and having a grand old time every day, they’re living in a land of delusion, because that’s very far from the lifestyle I got myself into when I chose the nomad life.

The Relentlessness of Nomad Life

Beyond all that work, of course, there’s “Where to next?” That involves tracking flight prices, reading other travellers’ accounts, doing research on the cost of living, checking out Google image search, surfing through available lodgings on AirBNB or with private rental companies, and so much more.

The “What’s next” part of life can spiral into 20 or 30 hours of mindless surfing and bookmarking if a nomad doesn’t put a stop to things by simply making a decision. If finances are tight, though, there is a LOT riding on that next choice. Blowing your budget on a daily basis with your only escape being an expensive flight is a big hole to dig one’s self. 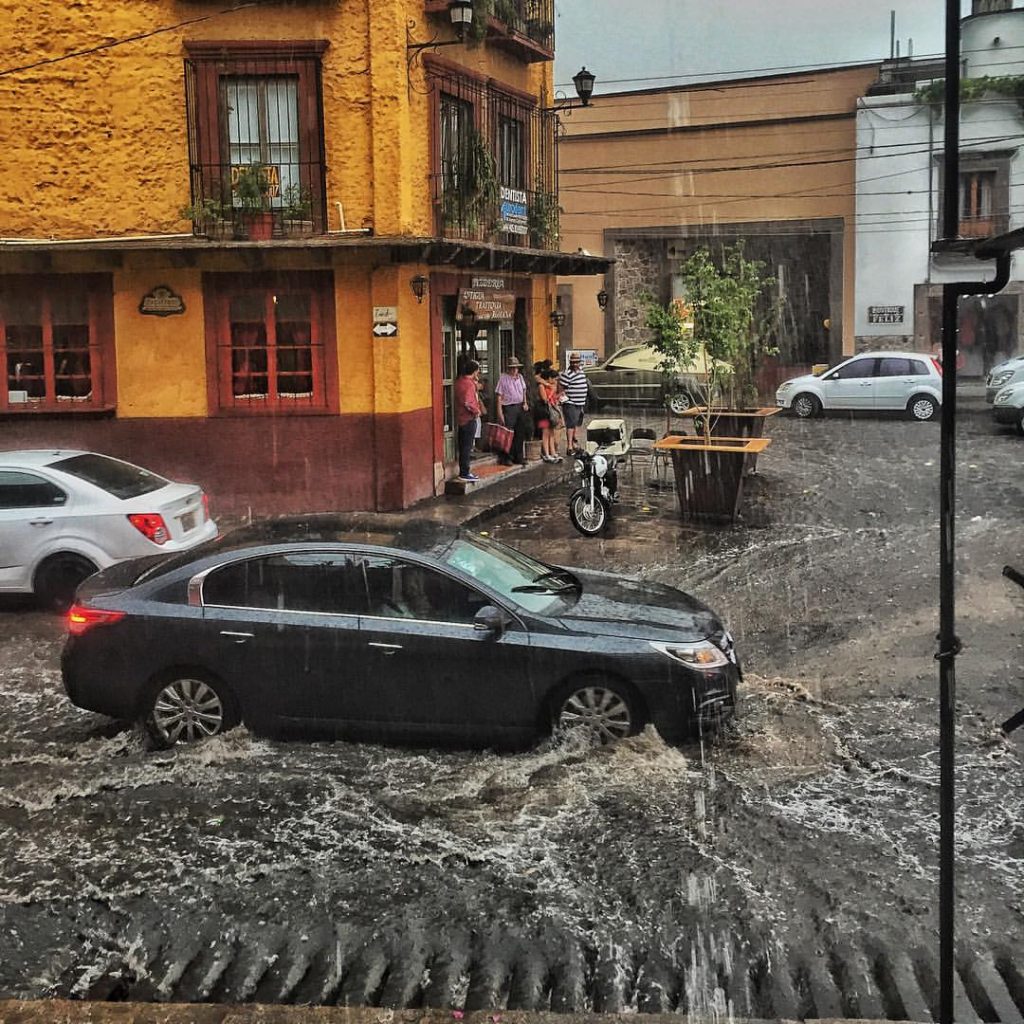 A nomad stuck in the rainy season in Mexico. I’ve been enjoying it, because it’s such an adventure and such a departure from rain Vancouver-style.

And Sometimes It Goes Wrong

Mexico, for me, has been somewhat a cautionary tale. My first rental was a decent enough place and for a good price, but it was a sauna in the hottest part of the year, and the worst room for heat was the bedroom. I spent weeks getting bad sleep because I couldn’t justify bothering to find a new place. In hindsight, I probably should have.

My second place, in a new city, turned out to have an asshat owner who seemed to think that $450 USD a month wasn’t enough to justify maintaining the home to a good standard, and I had to deal with a half-working stove, a sink that fell off the wall, bugs in the bathroom, and other good times. A couple weeks later I fled to another new place, where I enjoyed it for a couple weeks despite an ant problem that made me ultra paranoid. Finally I saw what was either a super-big fat mouse or else a small rat, and that was it for me, I was done.

Luckily for me, I had the rare luck of happening into a connection who had a friend who would be travelling for two months in the next town over, San Miguel de Allende, and who was open to subletting her place to me.

The Things Nomads Don’t Do

As a result of having a home-like home for the first time in a long time, and a kitchen that works, and a decent assortment of cooking basics, from dried spices through to rubber spatulas, after a week or two in town I just said “Screw being a nomad” and slipped into anti-social homebody mode.

For the first time in nearly a year, I went on a Netflix binge and devoured seven whopping seasons of The West Wing. When I wasn’t consuming Aaron Sorkin’s words, I was working on my own. From trying to fix my busted blog to chasing down writing opportunities endlessly, I spent countless days inside.

I’m still doing it too. For the first time in a couple years, I’m getting 8-9 hours of sleep a night, my body’s signs of stress are disappearing. Stuff like “restless leg syndrome” had been plaguing me, which I now attribute to stress and depression. It’s not a thing for me now. 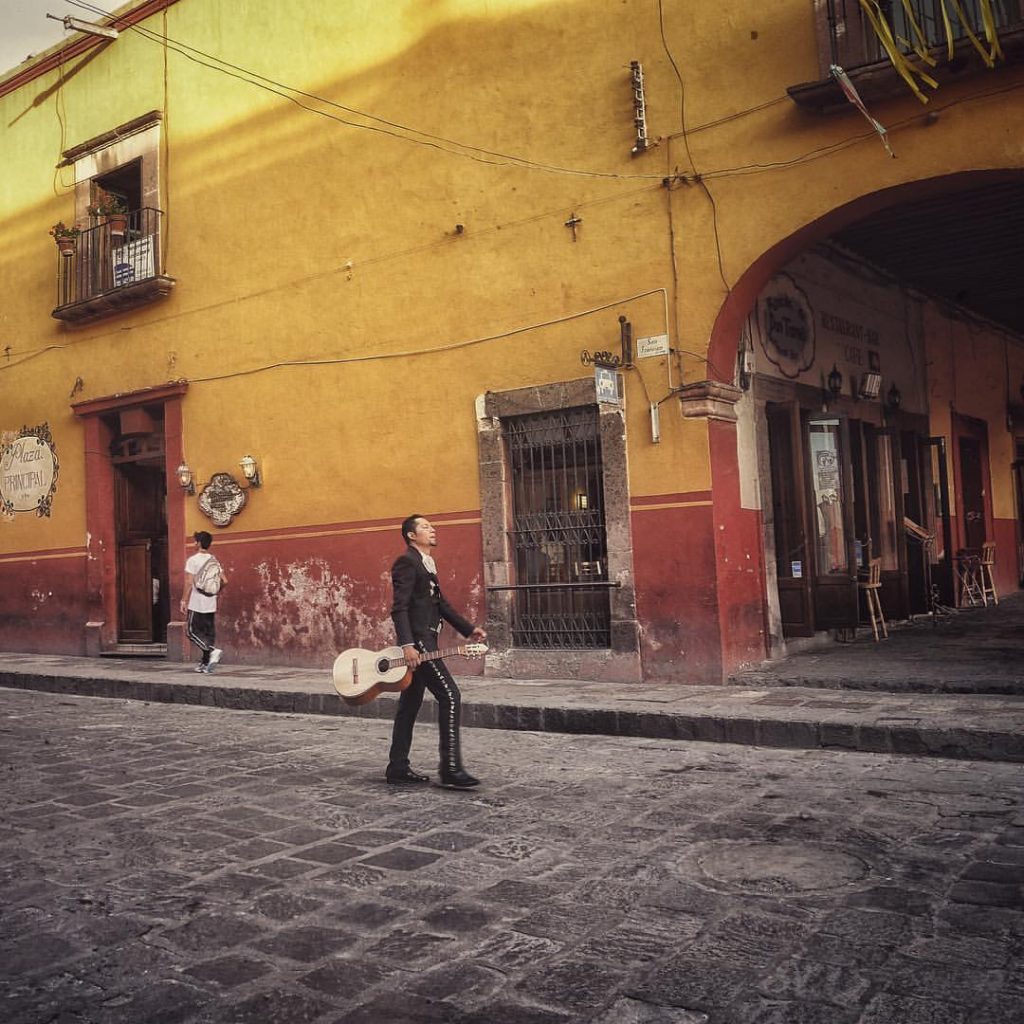 Mariachi man walks with an air of incredible coolness to him. You can’t buy this kinda cool.

The Holding Pattern is Holding

The fact is, I’ve been in Mexico over three months now, and while I don’t hate Mexico, I don’t love it either. It’s just… a place I’m in.

I like the people, I like the food, I like the culture, but it’s complicated. If we knew what we were looking for, we wouldn’t have to be looking for it, would we? And this is the situation I’m in. They say you need at least three months in a country to really get a sense of it, and so I think I know that I’m not really vibing off what Mexico’s got to offer now.

Instead, I’m lapsing into dreams of Europe. The architecture, the variety, the food, the everything. That’s what I’ve been dreaming of and what I’m researching. First up is Prague and a little city in the south. Next up, I’m not sure, maybe Poland and Krakow, maybe Greece. Maybe Georgia. Such research ahead, right? Right.

And So Here I Am

For now, I’m in San Miguel for another three weeks and then I’m off to Merida, in the Yucatan Peninsula, where I will be roasted daily but at least get to enjoy some air conditioning in the evenings.

I can’t wait to return to Canada, where I’ll stay with a friend in the rolling hills of wine country. These days I’m longing to smell the salt air, feel the crisp morning fog of September, and simply have friends around that I can let my guard down with, not worrying about whether my bag will get stolen or not.

Seven more weeks await me here in Mexico. Then it’s Canada for the same, and then Europe and all its glory beckons. Cheap Europe. Cold Europe. Vinophile Europe.

I’ll tell you more about San Miguel de Allende another day. I’m not as in love with it as others tend to be, because I find it a bit of a strange city. It’s packed with expats and somehow feels like a city that’s neither here nor there, maybe an idea hijacked and a life usurped. It’s hard to pin-point how I feel about it, because I’m not yet sure what the city is supposed to feel like. 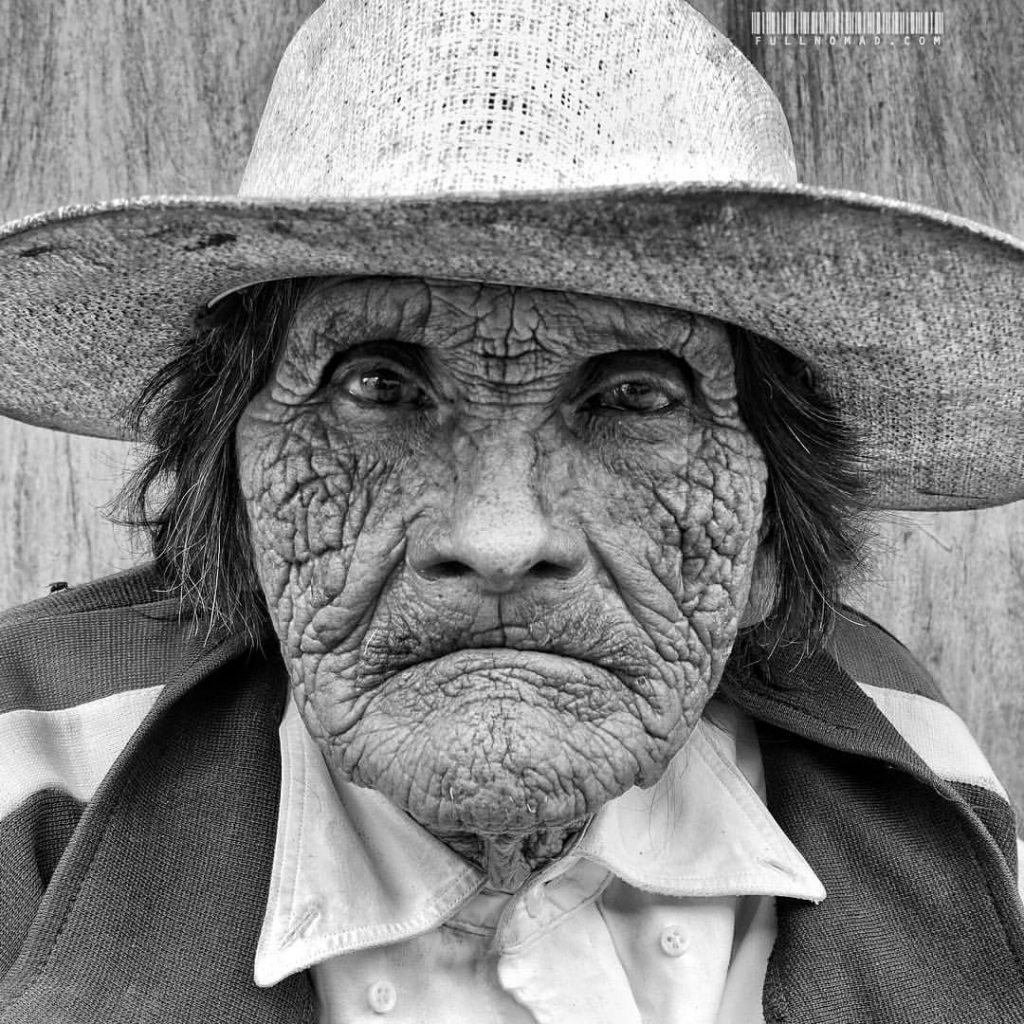 This elderly man was begging for money in San Miguel de Allende and it gave me much pause for thought as the invading foreigner.

Am I that poncey nomad who happens upon a place found by so many others that I wonder whether it’s jumped the shark, travelwise? Do I need to be on the cusp of things unfound, unknown? I don’t think that’s the case, I kind of like having English-speakers around for a change.

There’s a weird dichotomy between the city owned by Mexicans and that which is owned by the foreigners who’ve taken over, and what I find is that it makes the city less affordable for those who are from here, who are truly rooted. Something about that is unsettling for me as I talk to Mexicanos who lament how untenable life here is becoming for them.

After all, I’m the Vancouverite who has fled my home because foreign money has flooded into my city, making it untenable for anyone earning under $100,000 a year. Isn’t it ironic, then, that I’m doing the same thing abroad?

I guess that’s a question to answer another time. But now you know where I am and why I’ve been so out of the picture for so long now.

In the meantime, here’s some other writing of mine to enjoy. This is a rant against airline seats and the silly opinion that anyone who reclines is evil. Here is a tirade I wrote against a white blogger who had the audacity to blatantly lie about Africa. Finally, this is an opinion-editorial I wrote about mass shootings in America, if light reading is exactly the thing you don’t want. 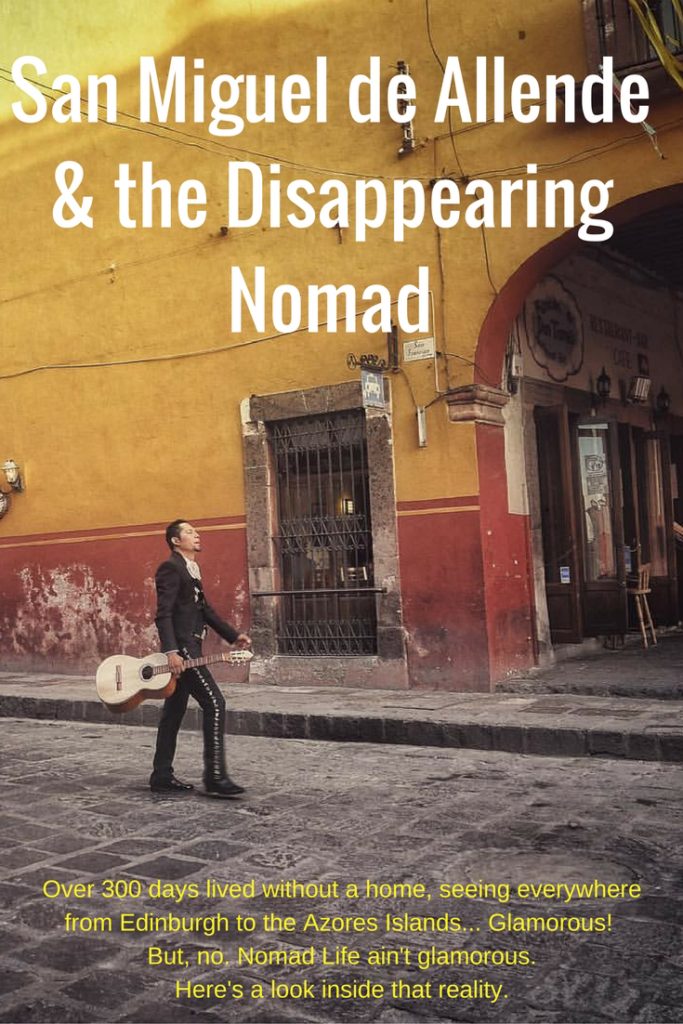 The nomad life isn’t glamorous after all. Here’s a look at the reality. 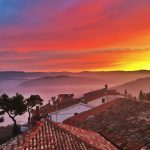 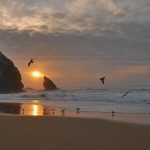