In the Name of the Father

If you’re getting ready to travel the world and profess to be a feminist, be prepared for questions like “Who’s your father?” and “What’s your father’s name?”

“Culture shock” is a misnomer. Usually culture shock is quieter, kinder, gentler, and doesn’t scream. A puzzler, it’s a head-scratcher rather than a smack in the head.

When I paid for my ticket on the ferry from Athens to the Cyclades Islands, they asked me my father’s name. This was the security question here, as opposed to “mother’s maiden name” like back home. It’s a strange one for me, given my father’s recent death, and how the topic of fathers keeps coming up in Europe. Oh, you mean the father that was alive until just over three months ago? Right.

Meet people from the old world and it’s only a matter of time before the questions “What does your father do? What was your father’s name?” arise in conversation. We are the daughters and sons of the men who came before us. What does your mother do? Well, she’s your mother, of course. But your father, ah, well, he’s the foundation of your would-be empire, isn’t he? You’ve seen The Godfather, right?

I’d like to say I lead with my feminist side and speak out on such questions, but I don’t. There are times to change the world and there are times to respect it for what it is. The question of old world morals and “who is your father?” aren’t some sexual-political agenda for me, and I’m sorry if it is for other travellers. I’m here to understand why they are the way they are, what makes this place tick. I’m not here to solve it or change it, because I’m too humble to think that’s in my grasp. I can offer my point-of-view, is all.

Here, working mothers are still a relatively new phenomenon. Back home, with 150 years of nationhood, women have worked nearly half as long as the country has been around. My grandmother told tales of her youth spent working in haberdasheries up and down the Eastern Seaboard in the ‘20s. My mother worked in paint shops, fish factories, hardware stores, and ultimately earned her real estate license.

But when standing in the middle of an island that was the center of industry and wealth 4,000 years ago, and which has had agricultural trade and fisheries for 7,000 years, you must understand that 75 years of working women isn’t even a blink of the eye.

My father’s name: Leonard. Teacher, 35 years. I miss this man every day.

A Father’s Name, A Child’s Place

“Oh, my father’s name is Marius. He’s a taverna owner.”

Just like that, the person’s entire life is understood. Ah. He’s the son of Marius. He came up in a taverna. All the town knows him. He knows all the town. And he can cook.

This line of questioning happened to me in Portugal and Mexico, too. Probably would have in Spain, if I’d talked to more Spaniards there.

That Time in Walmart

It was in Walmart (I know, right?) in Mexico, on a desperate quest for pharmaceuticals on the cheap, that I ran into a kind woman who had helped me just a couple weeks before, when I was trying, in futility, to flag down a cab. I had been in the wrong spot, apparently, and she sorted me out, flagged a cab, told him where I was going, and I didn’t even get the chance to say thanks or goodbye.

So, when I ran into Rita again at Walmart, it was like meeting an old friend. It was on my last night in town, but I took 30 minutes to walk through the store with her. She didn’t speak English, really, and I spoke no Spanish, but Google Translate allowed us to chat for a while.

One of her first questions was “What is your father’s name? What does he do?” Telling anyone my father was a teacher has always led to good things. They’re held in esteem the world over, and being the daughter of a teacher means I must be kind and smart too. So, the usual response, as was hers that night, is “Ah. Good. Very good.”

I know, there are problems with the patriarchal, male-focused world-view, and I’m proud of who I am as a feminist, but it’s not that easy. The world is changing. Sometimes that change isn’t coming fast enough, and other times it feels like the change is coming at breakneck pace.

A part of me longs for a world that’s as simple as knowing my father’s name will give me identity in the world. I am my father’s daughter, the daughter of a teacher. I am learned, curious, and investigative.

All these things are true, but there was a time when I wouldn’t have wanted to be thought as my father’s daughter. Now I say my father’s name with pride and I celebrate who he was. It took a long time to get there.

That’s part of the journey, I suppose. 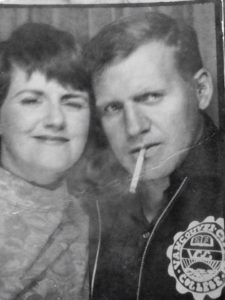 My mom was pretty notable too. I miss them both. I am equal parts of each of them, and I wish more than ever I could tell them about my adventures here in Greece and beyond.

Nowhere to Hide from Mourning

It’s funny I should come to mourn my father in a part of the world where his legacy impacts my standing, even in death. I don’t mind. It’s become a part of my grieving process, my reconciliation with who I was and who I’ll become long after the shadows of grief fade away.

It makes me think about the past and our future. Does everything need to be so black-and-white? Is patriarchy so bad? I’d like a world with both. Matriarchy and patriarchy. Let us be the children of both parents. Let us embrace all our roots. Let’s celebrate the past and the simplicity of from whence and whom we come while eyeballing the future that lays in wait.

We’re so given to finding flaws in the system that we fail to see there is still much to love about it too. As much as these societies are patriarchal, the mothers are revered too. Family is strong, blood is bond. We’ve lost that back home in North America, more so in Canada, I suspect, than in America, but family isn’t what it is in the old world. It’s intense, here.

No, my feminist flag doesn’t fly much in these parts. I’m okay with that. I’m just here to learn how we got to where we are, and where we might be going.

My father’s name was Leonard, and I remain his daughter, in every way.

culture culture shock greece matriarchy mexico patriarchy society travelling
In the Name of the Father2017-01-112017-03-28//www.fullnomad.com/wp-content/uploads/2016/04/logo2.pngFullNomadhttps://www.fullnomad.com/wp-content/uploads/2016/10/seagull-at-sunset-e1477255272982.jpg200px200px
About
Steffani Cameron
I'm a journalist born and raised in Vancouver, Canada. Trapped in a life others kept selling as "the dream," I decided my dream was decidedly different. I sold all the stuff I'd worked so hard to acquire, and at the age of 42 I set off searching for something else—culture, food, adventure, far off lands. In short, I sought the whole world.