Notes from a Foggy Morning in Motovun

If you’re new here, I’ve sold everything for the chance to travel the world for five years. Today marks exactly one month since I left my comfortable, homely confines of Canada. I am presently in Motovun, Croatia, in one of the world’s best wine-producing and truffle-harvesting regions. Follow my Facebook page for daily updates on where I’m exploring — or just “being.”

Shrouded in fog, my little Istrian mountain of Motovun is quiet and sedate this morning. Much of the valley around me is a hybrid of centuries past and modern times, but that hybrid almost falls away as one climbs this hill filled with switchbacks and hairpin turns for nearly 1.5 miles. 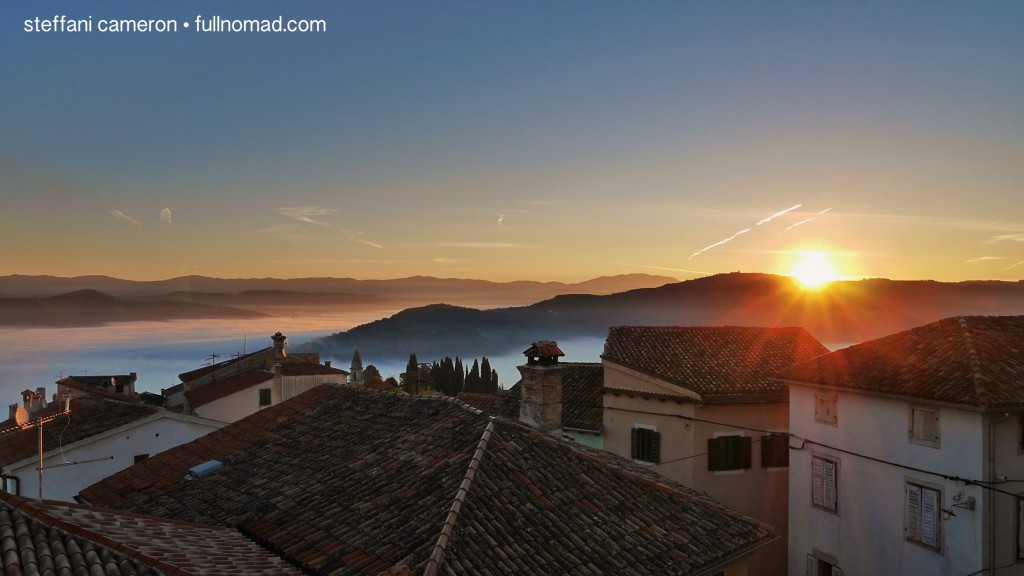 From my first morning in town, where fog was much less an issue.

Last night, I returned home from my first day of regional exploring, laden with bags filled with supermarket goods, a crest-falling moment for my naïve dreams of what I might find here, where I wanted to be buying from boutique shops some cheese made by a woman down the street or sausages cured in a barn just a stone’s throw from the shop.

But I was happy to have goods, as I want to cook some this month, and so there I was, on my way “home” through fog that long since rolled in. I was tired and relieved after a nerve-wracking first after-dark drive on twisty, narrow streets that epitomize parts of this region, and when trundling up the steep, cobblestone road to my lodgings, I came upon a little round old woman with a smooth, sweet face. Toothless and probably around 80, she spoke Italian to me, and it broke my heart we couldn’t communicate, because she oozed kindness and wanted to know about me, or at least talk to me. I tried explaining I spoke English, and said “Canada” a few times. She said “Italiano.” I told her I was in Irene’s house.

But then I remembered I knew a couple words of Italian and gesticulated at the foggy sky and blurted, “Bella notte!”

And this is part of Istria’s appeal. Is it Italian? Is it Croatian?

It is, I am told, not really either. Italian heritage is strong here as it spent several centuries under Venetian rule. Croatia also has its place, since its flag flies in these parts, and has since my elderly walking companion was a child in a post-war world, but there’s a strong disconnect. It really is another time, in a way, here. They shun the fast-fast-fast of the world and embrace the slow life. You’re as likely to be greeted with a “Ciao!” in the morning as you are “Dobro jutro!” because either goes here in Istria. 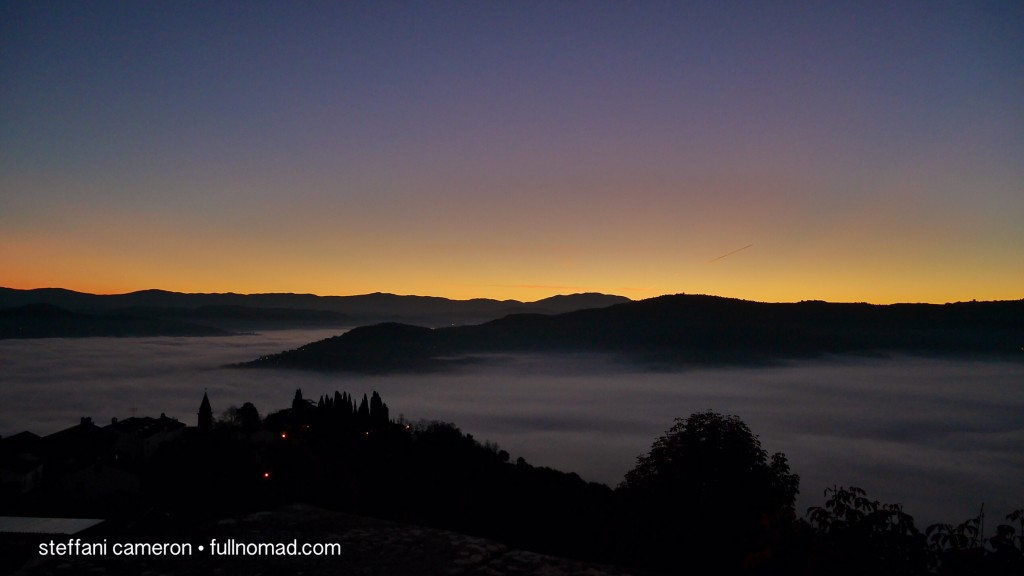 Fog in the valley below. A sunrise photo I’ve dreamt of taking for the better part of a year now, and my first day here.

I can’t say my stresses of the modern, Western world have fallen away from me yet. I’m having too much trouble finding my cadence with work, and do not have the luxury of NOT working, so this is a pesky situation indeed. How does one find a cadence for work in an area where not working is a virtue?

Somehow, I’ll find my rhythm. After all, it’s what it takes to be “living the dream.”

For the last 15 hours, the internet was a figment of my imagination. It, too, seemed to have adopted the slow life. I had to actually read for a while. That’s life when you live at the top of a mountain dating to medieval days.

It’s amazing, standing at the top of the stone walls that surround this mountain. I know locals take it all for granted, but as someone who was taken on field trips to my home province’s “Fort Langley” as a school girl, a fortification that even now isn’t 200 years old, it boggles the mind that life here has been ongoing for a millennium-plus.

I stood there, staring out over the valley below, imagining invading forces and the intimidating prospect of climbing this steep hill that challenges automobiles even now, only to be faced with 40-foot walls enforced by armed Venetians at the top. No wonder, then, that it seems to have remained in Venetian hands until relatively modern times.

Being from the West Coast of Canada, I have lived my life in arguably one of the youngest regions of the planet, if you exclude the native history – which is easy to do, given that so little of it remains tangible for today’s generation. Theirs is an oral history full of ideology and legend. “History,” for me, came in the form of towering cedars, decaying totem poles, and rugged coastline man has only recently managed to conquer – which itself is a laughable claim, because anyone who’s lived a winter in Western Canada’s Tofino will tell you there is little one can do to “conquer” that wind-swept land.

This… This is living, breathing history. It’s an amalgam between what always was and what is hoped will be. A hybrid of past that’s enhanced with the present. Today’s wired world makes life here a little less isolated. The automobile allows them to continue living this life, thanks to short forays to better-supplied surrounding towns. In bringing the modern age into history, it makes this old world life more likely to sustain.

Given that Motovun is tentatively listed to become a UNESCO World Heritage Site, that sustainable potential is a welcome reality. This should indeed be sustained. We need for this kind of living history to stand immortal among us. But under the droves of tourists who descend in tourist season, it must be difficult to find that authenticity that’s so present here for me now, in November.

Perhaps I see nothing of the world around me today, lost in fog and a desperate sunshine hoping to beat its way through the mist, but it’s all right. A hazy world is what I can appreciate, for now. Isolated, dreamlike, and romantic, this is Istria.

Adapting to a new old world

I am only a newborn in this travel life and, so far, adopting the Croatian language has escaped me. Am I terrible at languages, or am I just so culture-shocked that my thick head is temporarily impermeable? I think it’s the latter. I’m still so caught up in my haggard, rushing, North American ways that it’s hard for me to soak things in. Remember, I worked overtime for around 2.5 years to put myself in a position to do this. I imagine it’s something like stepping off a freighter after three months at sea – finding my legs will take some time.

Maybe soon I’ll find the phrases and ability to exchange words with little old ladies I meet on the cobblestones. Perhaps I’ll source those cheeses I dream of.

That, though, is the beauty of this life. I don’t know what I will or won’t do. That’s becoming ever more apparent to me – that “best laid plans” are a laughable notion in travel. Nothing will be as I hope it to be. I’m learning that now

Instead of it being a disappointment, my inability to plan the way I want, it amuses me. It’s the mystique of travel. The only thing I can do is go out there and see it without letting all my preconceptions get in the way.

Slow life here in Istria, filled with TV antennas and free WiFi in old-world cafes, may not be quite what I imagined it to be, but I know this hybrid of time and place will one day give way to a new way of living. And I’ll also know that I was here now. I’ll have lived as a local for a month and will always have this memory of being here in a place that’s not Italy, not Croatia, but something uniquely in between.

adapting croatia history istria living history living in history Motovun Old World travel
Notes from a Foggy Morning in Motovun2015-11-052015-11-05//www.fullnomad.com/wp-content/uploads/2016/04/logo2.pngFullNomad//www.fullnomad.com/wp-content/uploads/2016/04/logo2.png200px200px
About
Steffani Cameron
In 2015, I sold everything to travel for five years. I'm living out of a duffle bag and works wherever I can get some Wifi. A trained journalist and avid photographer, I'm passionate about culture and what makes us tick. Click below to contact me for projects and opportunities.
Showing 9 comments 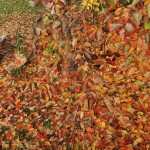