I’ll Do It My Way

Tell people you’re travelling the world, and they’ll tell ya how to do it.

Tell ‘em you wanna hang out in one spot for 2-4 weeks, they’ll tell you there’s no need to be so sedentary, that there’s “only so much to do” in any one spot.

Some people, it seems, think I’m a little crazy to want to stay in small cities for two to three weeks a pop. Like who would do that? Just… stay there? It’s a big planet, they’ll tell ya. Daytrips abound! Get out, do The Stuff, see The Things! Go, go, go!

It makes my head spin. I’m glad others enjoy travelling at a frenetic pace, churning through thing after thing after thing, but that’s not me. That’ll never be me. No interest in that, no plans to do it.

In years to come, it’ll be often you find me taking 2-3 weeks to just sit quietly in a spot in the country. Reading out back in a stone cottage in Breton, Slovenian backcountry, Tuscan farm. I’ll find remote and beautiful places to just press pause, stay surrounded by nature, let someone feed me, and just walk the surrounding land day after day after day. And write. And sleep.

That’s the good stuff too, you know. What good is it to see so much of the world, to do so much, that you haven’t any time to experience being in it?

I cannot tell you enough how many people I know who had extensive travels, blinked, and wondered where it went. They regret not stopping to write and absorb the time. (But they loved the travel.)

In turning 42 the week I leave, and in post-traumatic-brain-injury life, I have earned the luxury of knowing just how quickly we lose our experiences. Memories, they’re fragile stuff. Poof, and they’re gone.

One day, your memories become like sightseeing in fog. You have an idea of what it is, but much of the finer detail has vanished. That’s where writing and photography come in. Each alone can sometimes not be enough, but together, it’s powerful stuff. For them, you need time and peace.

Two or three weeks in a town has its advantages. You notice more of the locals, stumble upon unexpected delights all over the place. You breathe. You stop. You smell. You adapt.

Writer Bruce Chatwin told this tale in his travel classic Songlines, and it’s one of my all-time favourite tales.

“A white explorer in Africa, anxious to press ahead with his journey, paid his porters for a series of forced marches. But they, almost within reach of their destination, set down their bundles and refused to budge. No amount of extra payment would convince them otherwise. They said they had to wait for their souls to catch up.”

My travels will never outpace my soul. 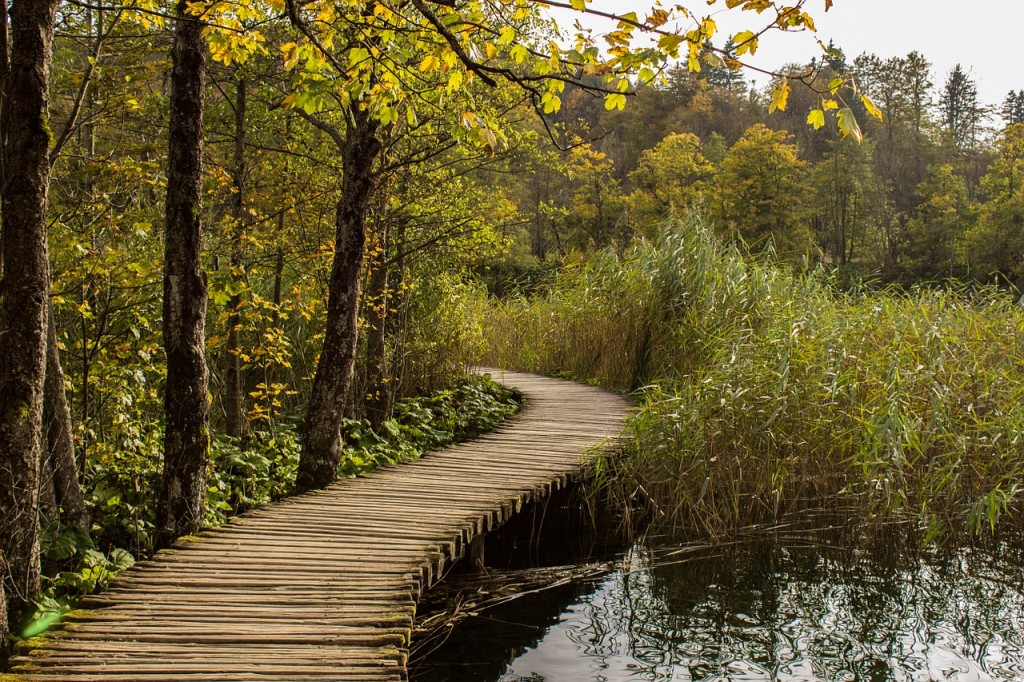 The path along Plitvice Lakes by LalalaB on Pixabay, Creative Commons image.

I feel like I have spent every day since I turned 30 just trying to keep up with life. I’ve had struggles, challenges, and so much stuff going on. Joy? Not much of that. Happiness? Not much of that, either. Satisfaction, I’ve had a lot of that in the last couple years, just from accomplishing goals and changing my life from the “negative” column to the “positive” column, and unlocking the ability to chase this crazy-ass dream of mine.

I will not be “on vacation” until sometime in early 2016. Travel? Yes. Vacation, no. Seriously. I don’t get time off, I work through most weekends for now. I’ll be dismantling my life for weeks leading up to my departure at the end of September. It will be an insane amount of work. I’ll sell everything from cutlery and office supplies to my entertainment systems and computers.

Somehow, I’ll do it all in a way that allows me to have a “home” up until the day I leave. Whatever I can’t / don’t sell before that day will be donated to charity on my way out of town.

Then to Vancouver for a whirlwind week of farewells with family and friends. Then England to visit an old friend for a couple days before I take a flight to Croatia, where I’ll have 3 to 4 days to get acclimatized to the city and ready for working once again.

For a while, I’ll likely eat out twice a day. Because I can. Because it’s cheaper than here. Because.

By not cooking, not needing to clean house, my life will be much simpler. There’ll be no people to phone, no clients to wow, no obligations on my time beyond hours to clock for work.

The moment I speed up my frequency of travelling place to place, I’ll lose the slow, laconic pace I so desperately need after an insane 12 years of never letting my guard down. Plus, travelling is a financial black hole. The money vanishes much more quickly the more you change places. The lodgings are less inclined to be cheap, too, since two weeks is when you start getting price reductions offered. 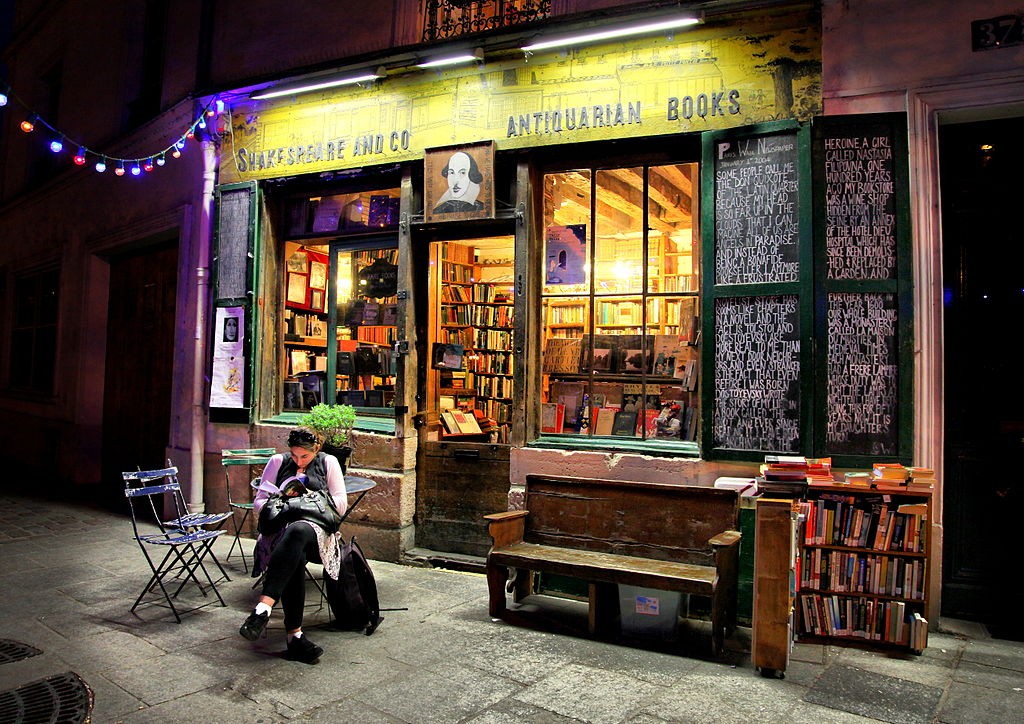 I’ve read the history of Sylvia Beach & her store. I will browse there, one day. By Christine Zenino (Flickr: Shakespeare & Co Books; Paris) (http://creativecommons.org/licenses/by/2.0)

Being True to Myself

I see other travellers constantly collecting experiences like notches in a belt. Here, there, everywhere. Time’s a tickin’, don’t skip anyplace.

I’m a writer, a photographer, then a traveller. That order. I’m not the first. Writers on the road look for a different life than others do. Stopping is the whole point to writing. Observing — not being in the mix, but instead watching it and recording it.

There are places the world over that were first discovered by writers who wrote about their surroundings like they were drinking a rare elixir. All these exotic locales first found by writers and artists were places that were cheap, often isolated, usually beautiful, and which allowed them to work with inspiration and ease. They weren’t running around the country on endless daytrips. They found a place and became a part of it. They watched the pulse of life unfold, found simplicity in the stories and people around them. They unlocked a piece of who they are and they became better writers because they took the time to stop, to observe.

In so doing, many of them turned other travellers onto those places, ironically erasing the appeal of what it was they found and recorded.

I’m not collecting belt notches. I’m not a turnstile traveller. I’m also not judging others who are.

Travelling is 100% personal. Don’t tell me, or anyone else, what the “right way” to do it is. Places that are amazing for you may be boring for me. My heavenly places may not translate for you. Sometimes I’ll have busier adventures with roadtrips and train journeys. Others, I’ll be as still as breezeless day.

The only thing that matters is whether I find the right combination of places, times, and moments to be the writer I want to become — so I can inspire, entertain, educate, and delight others as I wish.

That’s an equation that no one but me can solve. And having only ever been all over the Western North America and a few places in England, I have no idea what the answer to the travel equation is. That, though, is the fun part. I won’t get so lost in seeing things that I don’t experience them. If I’m going too slow, I can speed it up. But rushing can’t be undone and I’d rather start slow.

Mine will be a laconic, mellow tour of the world. Travelling my way.

going slow living slow party of one pressing pause Slow Movement solo travels stopping to breathe the Slow lifestyle travelling travelling my way travelling solo travels by yourself
I’ll Do It My Way2015-04-272015-04-27//www.fullnomad.com/wp-content/uploads/2016/04/logo2.pngFullNomadhttp://www.fullnomad.com/wp-content/uploads/2016/05/Photo_for_DIGITAL_NOMADS_page.jpg200px200px
About
Steffani Cameron
In 2015, I sold everything to travel for five years. I'm living out of a duffle bag and works wherever I can get some Wifi. A trained journalist and avid photographer, I'm passionate about culture and what makes us tick. Click below to contact me for projects and opportunities.